We’ve been taking part in the first ever Rail Week this week with a series of
events designed to promote careers in the rail industry. Over the week, we’ve opened our doors to Pear Tree School and the Armed Forces to highlight the benefits of a career in the rail industry. Talent Manager Chris Buckley has provided us with his thoughts about the week…

Wow! What a busy week – we’ve had engineering tours, school trips, work
experience placements and Twitter chats! It’s been great to be part of Rail Week 2016.

The Train Planning & Access team have had a work experience placement with them for the week, we managed to grab a sneaky picture before he boarded the train at Derby for his cab ride with Martin Ward. 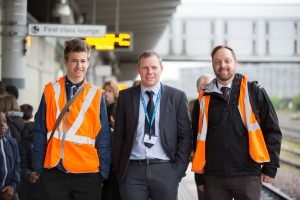 On Tuesday, we hosted 15 members of the Armed Forces looking for their next career move when their service with the forces comes to an end. Depot Manager Kyle Stewart and a couple of his engineering colleagues very kindly opened up the Bombardier and Etches Park Depots to show our guests round and tell them more about engineering within East Midlands Trains. 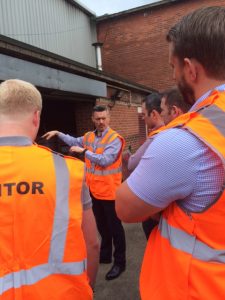 On Wednesday, we hosted 2 Year 5 classes from Pear Tree School who enjoyed a tour of Derby Station and a train ride to East Midlands Parkway. Customer Experience Manager Danni Blavins with the support of Travel Advisor Deana Cook gave the pupils a great insight into life behind the scenes at Derby station and Senior Conductor Ben Mousley made sure the kids had a great day.

Finally on Thursday, the Talent team went digital with a Twitter chat, kindly hosted and supported by Digital Marketing Executive Lucy Pickering and Cheree Clegg from the control team at EMCC. We chatted online to a number of tweeters covering topics such as Apprentice opportunities, roles available at East Midlands Trains and how to become a driver.

A huge thank you to everyone who took part in Rail Week 2016 to make it a really successful event at EMT. We’re already looking forward to making Rail Week 2017 bigger and better!